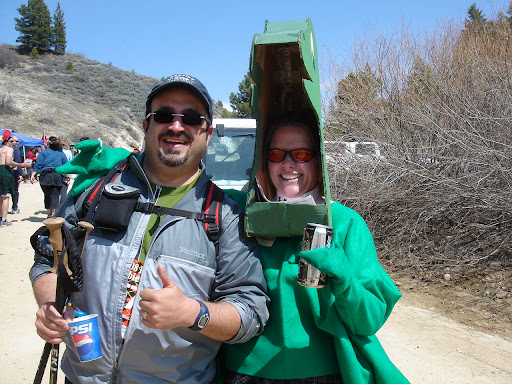 Billed as the toughest half marathon in the Northwest, the Race to Robie Creek is one of many fun events here in Boise. It's 13.1 miles from Boise to Robie Creek, along Rocky Canyon Road -- 8.45 miles uphill to Aldape Summit, and then 4.65 miles downhill.

The challenge not only lies in enduring the extremes of the race route, but actually getting into the race. The organizers, once again, partnered with a lame online service provider that can't keep up with the thousands of people around the world trying to get one of 2,400 slots. On registration day, I wasted six hours facing timed out browsers and site crashes. I didn't get in, but I did score a bib three weeks later, thanks to a drawing at Shu's Idaho Running Company.

On the morning of the race, I met my friends, Tim and Lewis, at one of the parking areas near the end of the marathon. It was a cool 39 degrees, the sky was overcast, and I hit snow flurries on the way up. Weather forecasters were predicting snow and above-freezing temps at Aldape Summit, and the paper reported lots of mud at the top. Nothing new for this race. Each race is framed by the random weather. Three years ago it was blazing hot at the noon start and they had people passing out along the route to the top.

From the parking area, we rode back to Boise in Tim's truck. I managed to keep my Camelback's hydration mouthpiece out of the pool of God-knows-what liquid and feathers from Tim's long-forgotten duck hunt (and recently thawed ducks). Back in Boise, it was overcast and windy. At the race start, we had an hour and a half to kill after registration and getting our timing chips -- we spent the time catching up with other runners, listening to the band play cheesy rock, and keeping warm.

Just before the start of the race, the Scottish-themed, kilt-wearing Rocky Canyon Sail Toad gods blessed us with a back wind and a parting of clouds that provided warm, sunny weather for the entire race. I'll spare the details of my miles, and let you check out some of the photos I took along the way.

While I was going solo, I met some cool people on the way up and down. The highlight was Temptation Station. Just as you near the summit at mile 8, the trail feels steeper -- you're within sight of Aldape Summit (elev. 4,600 ft), your legs are looking forward to getting in some downhill miles, and it's the moment when some racers wonder if the race is really worth all this effort.

Temptation Station is hosted by the Boise Hash House Harriers ("We're really more of a drinking club with a running problem!"), they set out an "aid station" that features booze, cigars, Zingers and lots of loud music. For being near the end of the race, the party at Temptation Station was just getting started. It was packed. Last year, I politely passed on these folks. This year, I gave my dogs a rest and graciously enjoyed a couple of beers, Zingers, and shots of tequila (yes, they had Patron Silver!). They urged me to stay, but I had last year's time to beat, so I thanked my new friends and hit the dusty trail to Robie Creek.

On the way down the backside, I passed several runners/walkers hanging out at the real aid stations, getting oxygen and seeking treatment for other injuries. My heart rate was good, I was breathing easy and my legs felt solid. My training paid off after countless hours getting up to (or close to) Aldape Summit in three feet of snow, 19-degree temps, and sometimes freezing wind and snow.

At the end of the race, I crossed the finish, grabbed my new Race To Robie Creek shirt, and headed straight to the beer station. They were serving sweet Sierra Nevada. Ahhhh!

Let me be clear, I'm not much of a runner (and I like my knees), so unlike most racers, I walked this thing. I wasn't alone. Despite my final time, there were lots of people behind me (some way behind me). I beat my previous year's time by 15 minutes. It might not sound like much, but I'm damn proud of it. Join me next year and get bragging rights to completing the toughest half marathon in the Northwest. It's a lot of work, but a lot of fun.
Posted by Metzgar Family Blog at 4:04 AM

Email ThisBlogThis!Share to TwitterShare to FacebookShare to Pinterest
Labels: race to robie creek

NICE WORK, DOUG! You should be PROUD! mccauley

Well done! I don't know if I am ready for joining you during the race, but I think I might have to "volunteer" my time at Temptation Station. Looks like fun!